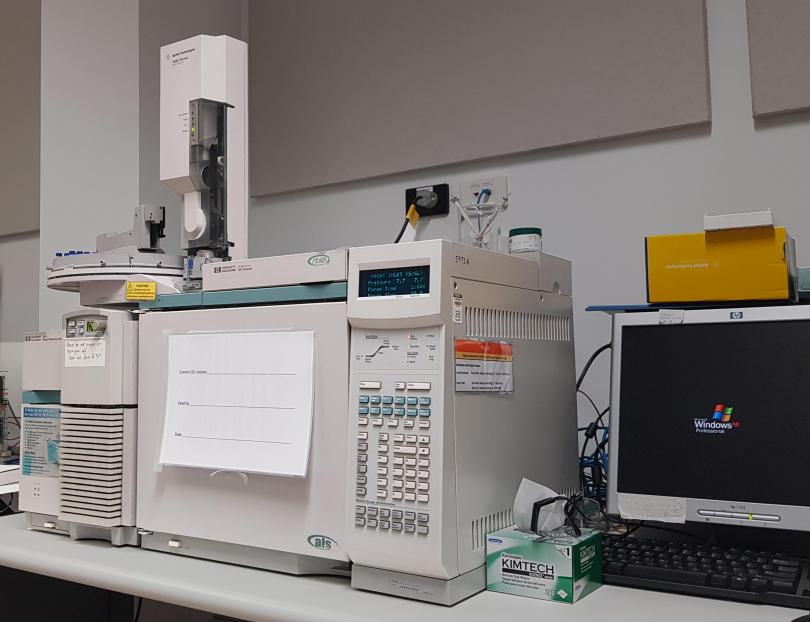 The HP 6890-5973 GC/MSD allows the analysis of small molecules (m/z 50-800) in a wide range of sample matrices. This system can be operated in electron ionisation (EI) and chemical ionisation (CI) modes.

In EI, the standard ionisation energy of 70eV which has been established for many years, is aimed at making mass spectra from different MS detectors comparable. These relatively high-energy electrons collide with molecules of the sample that is to be analysed. These collisions produce (primarily) positive ions. Upon ionisation, the molecules of a given substance fragment in fairly predictable patterns. The fragmentation and rearrangement processes are now extensively known. They serve as fragmentation rules for the manual interpretation of mass spectra and thus for the identification of unknown substances. EI is less sensitive than CI but is still used for quantitative analysis.

Chemical Ionisation/Isotope Dilution - In this approach standards and specimens of unknown analyte content are intimately mixed with a calibrated amount of isotopically labelled analogues (Internal Standards). These are then extracted from the sample matrix and converted to stable volatile derivatives in order to achieve successful elution and separation. At the same time, derivatives are also prepared to reduce polarity, increase sensitivity (ionisation efficiency) or specificity of a given analyte. The derivatised samples are then analysed by GC/MS using negative or positive ion chemical ionisation with methane as a reagent gas. To calculate the results, the ratio of the peak area for the analyte to that of the internal standard is determined for each sample and the concentration calculated using the calibration function (peak area ratios vs. concentration) obtained from standards.

GC/ECNI-MS is well recognised as a highly sensitive quantitative technique and results can be obtained at femtomole level in SIM (Selective Ion Monitoring) mode.